The initial inspiration of this series comes from the challenge of producing visual art without a light source. The stylized pointillism of stars produces a lighter darkness which outlines the silhouetted central objects and gives all the images in the series a unifying signature. The monochromatic rendering of the central objects robs them of their colorful vitality. Sunflowers, forests, even the sun seem lifelessly represented. This specter of death is elaborated with images of a cemetery's stone angel and a hunting owl.

Near the midpoint of this series another light source appears like a Promethean gift in the form of a comet. The sentry light in a sleeping house and the competing constellation of lights on a passing plane now illuminate the central objects. A lighthouse appears first asserting its presence and then sending its message of light into the darkness. The final image in the series summarizes the role played by humanity and its planet; a single lit match contributes our small spark among the clamoring universe. 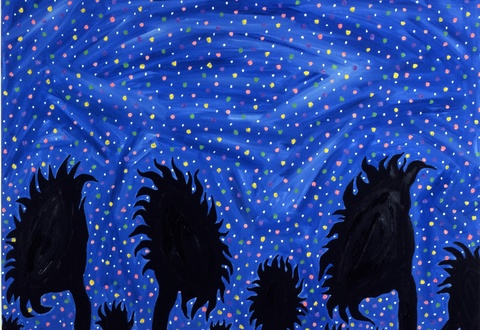